Aghakhani Dominates Am World Final Race 1 in Win from Pole

Aghakhani Dominates Am World Final Race 1 in Win from Pole 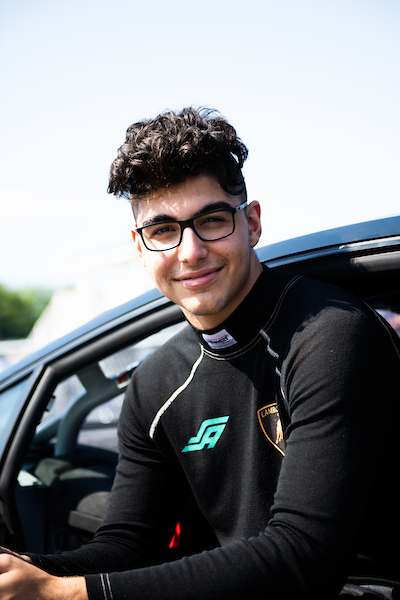 Jerez, Spain (Saturday, October 26, 2019) – It was an exciting day for US RaceTronics’ drivers today at the 2019 Lamborghini Super Trofeo World Finals.  Steven Aghakhani won the pole for both World Final Am races in morning qualifying with a remarkable pole time for Race 1 of 1’42.239 and an equally amazing lap time of 1’42.216 for tomorrow’s Race 2 pole. These were the first overall pole positions for the 16-year-old rookie from Southern California. Aghakhani followed up his great qualifying with an impressive victory in Race 1 of the World Finals crossing the finish line in the No. 106 Lamborghini of Beverly Hills with a gap of 8.893 seconds over second-place finisher McKay Snow. Aghakhani was cool and collected throughout the race doing exactly what he needed to in order to bring home the victory and give himself a good shot at the World title tomorrow.
Unfortunately, the team missed the setup a bit for the Pro-Am drivers. As a result, both cars had to start much further back in the field for their race. Patrick Liddy started 16th overall and fifth-place in class, while Damon Ockey started from 21st overall and eighth in class. Liddy was hit in the opening laps, which hindered his and co-driver Ron Atapattu’s abilities to move the No. 124 Elephantea Lamborghini of La Jolla into a podium spot. The duo ultimately finished eighth out of the thirteen cars in Pro-Am, but hope to have a better result tomorrow.
Ockey, however, was lucky enough to avoid the chaos at the start of the race and was able to drive a clean, consistent stint handing the car off to Jacob Eidson in great shape. Eidson encountered a bit of traffic out of the pit, but then got the clear track he needed. He quickly moved through the field making some great passes on several Pro-Am cars to bring the No. 109 Lamborghini of Vancouver home second in Pro-Am. The second-place finish gives the North American Pro-Am champs the opportunity to battle tomorrow for the World Championship.
Race 2 of the Am World Finals starts tomorrow, Sunday, October 27, 2019 at 11:30 a.m. local time, while Race 2 of the Pro-Am World Finals starts at 3:00 p.m. local time. Don’t forget you can stream it live! Live timing for all sessions at Jerez can be found at: lamborghiniWFresults+unsubscribe@perugiatiming.com.
Follow US RaceTronics at:
www.USRaceTronics.com, and through Twitter www.twitter.com/usracetronics, Facebook www.facebook.com/usracetronics, and Instagram  www.instagram.com/usracetronics
WORLD FINALS RACE 1 QUOTES:
Steven Aghakhani – “The start of Race 1 of the World Finals couldn’t have gone better. I had a very good start and held first-place the entire time. We just did what we had to do and we’re super excited! It’s an amazing feeling taking the overall first position. We had a perfect pit-stop, perfect spotting and it was amazing! We’re super excited and ready for tomorrow.”
Damon Ockey – “Today’s race was quite an event. I started, but there was a lot of drama in the front; quite a few cars went off track in front of me. I was able to make it through pretty clean. Did have a little bit of a bump with another car, but I got through clean and drove the best I could. I brought it in for Jake and he just started putting down some hot laps to move us up from where we were (sixth-place in Pro-Am) to P2 in Pro-Am. Car setup was awesome and US RaceTronics was awesome getting the car ready for us. It was a great race!”
Jacob Eidson – “Great race! Damon did an awesome job keeping it clean, especially on Turn 1 with all that chaos through Turn 3. I had a pretty good stint. At the beginning I got caught up by some traffic, but toward the end I just tried to lay down the fastest laps that I could. I got around quite a few Pro-Am cars and we had P1 in our sights, but just didn’t have quite enough time to catch up to them. But, tomorrow’s a new day. I’ve obviously got to thank US RaceTronics for all their hard work.”
Ron Atapattu – “We live for another day. We had a difficult time. The car was not stable, the weather was hot; Patrick got hit in the back. I don’t know if that caused any issues but the car was a little difficult to drive. We did the best we could, and we’ll be back for another World Final race Sunday.”
Patrick Liddy – “It was a tough day. I got hit early on, but made a good recovery to keep the car on track for the first stint. I was able to maintain fifth-place in class, but wasn’t able to make the passes I needed to in order to move up in the field. Ron and I will be racing for redemption tomorrow!”
Shane Seneviratne – “Well, we started off with a bang! Steven basically dominated the race. He started from pole, maintained a comfortable lead and finished first. He drove very intelligently, didn’t take any risks, and brought home the first-place finish to optimize our chances of winning the World Championship tomorrow. We’ll see what happens tomorrow. There’s a good opportunity there.
We missed our qualifying setup a bit with both the Pro-Am cars, so Jacob, Damon, Patrick and Ron had to fight their way through to get the best result possible. In the end, Damon and Jacob came through with a second-place finish to still be in the competition for the Pro-Am championship. We’re hoping to capitalize on it tomorrow and do our best with both championships and see what results we can get.”