Jerez de la Fontera, Spain (Tuesday, October 22, 2019) – The US RaceTronics crew and drivers arrived in Spain Sunday for their final weekend of racing for the 2019 Lamborghini Super Trofeo season. Damon Ockey and Jacob Eidson clinched the North American ProAm championship at Laguna Seca last month, so their focus is now on winning this weekend’s World Final. Steven Aghakhani is still battling for the North American AM title, while Ron Atapattu and Patrick Liddy are looking to move the Elephantea Racing car up to third in the North American ProAm championship. 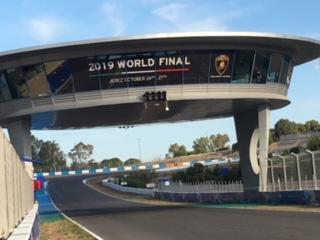 Car numbers will be slightly different for the weekend, with the North American teams adding 100 to their numbers to differentiate them from the Asia teams who will be adding 200 to their numbers and the Europeans who will keep their original numbers since the race is being held in their region. USRT and the North American teams will be sharing the track with the Asian teams for their track sessions through the end of Round 6 on Friday. The format for the World Finals will have all three regions competing against each other, but will be broken down with the Pro and ProAm cars on track together, while the AM cars will be on track with the LB Cup cars. With cars in both ProAm and Am USRT will have at least one car participating in every World Finals race. 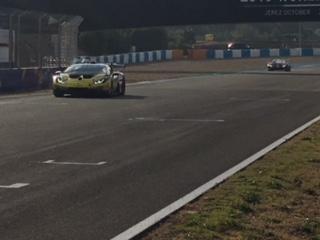 The week started for the No. 109 Lamborghini of Vancouver this morning with Damon Ockey and Jacob Eidson splitting time for the first test session so that both drivers had an opportunity to get a feel for the new track. Eidson drove the entire second session and posted the third-fastest time with a 1:42:687. The duo will go back to splitting the sessions for the remainder of today and tomorrow’s testing. With a goal of winning the ProAm World Finals, the North American champs are focused on getting the most out of each session leading up to Saturday’s first World Finals race. 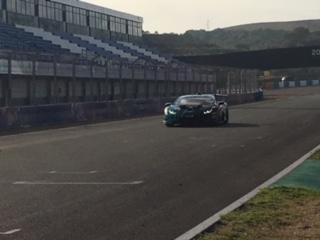 Steven Aghakhani is the only US RaceTronics’ driver to have experience at the Jerez circuit and got off to a quick start in the first session of the day. However, the No. 106 Lamborghini of Beverly Hills suffered clutch issues toward the end of the session and was unable to participate in session two. The crew’s goal is to have the clutch replaced in time for the young Southern California driver to be back on the track for the remaining test sessions. Aghakhani is pushing hard to earn maximum points this weekend in his attempt to pass McKay Snow for the North American AM championship. Aghakhani was unable to participate in the first round of the 2019 Lamborghini Super Trofeo season as he was just 15-years-old when the team competed at Barber Motorsports Park in early April. Despite missing two races, Aghakhani sits just 13 points behind Snow. 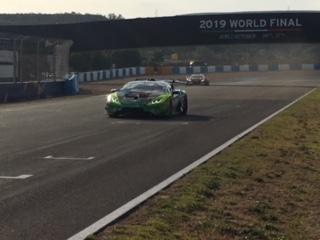 Patrick Liddy was the quickest US Racetronics’ driver in the first test session of the weekend and continued to show speed in the second session with the seventh-fastest overall time. Liddy and Atapattu split seat time in the No. 124 Elephantea Lamborghini of La Jolla for the first session of the day, but have a different strategy for the second and third sessions of the day. Liddy drove the entire second session and Atapattu will be behind the wheel for the entire third session. The duo will split the fourth session in order to get comfortable with the new track as they make their push to gain the last podium spot in the North American ProAm championship. They are currently in fourth-place just eight points behind third-place driver Bruno Junqueira.
All three cars have been strong all season and the team expects to continue their success this week in Jerez, Spain. Live timing for all session at Jerez can be found at: lamborghiniWFresults+unsubscribe@perugiatiming.com.
Follow US RaceTronics at:
www.USRaceTronics.com, and through Twitter www.twitter.com/usracetronics, Facebook www.facebook.com/usracetronics, and Instagram  www.instagram.com/usracetronics
Quotes:
Steven Aghakhani – “This is the moment I have been waiting for all season… the world final at Jerez. I have been training hard for this race and I am looking forward to the experience!”
Patrick Liddy – “I’m very excited to be joining Ron and the Elephantea team in Jerez, Spain to close out our Lamborghini Super Trofeo campaign this year! The team has put in a huge amount of work to get us here and I’m very grateful to them for all of their help this year. I’m looking forward to putting on a good show at World Finals!”
Jacob Eidson – “I’m real excited to head to the World Finals. Obviously, it’s the most exciting time of the season. We don’t have any pressure points wise in our championship, so we can just go out there and go as hard as we can and when it comes to the World Finals, hopefully we can have what it takes to win ProAm for that as well.”
Damon Ockey – “Really looking forward to the World Finals in Spain. We had a really great season! Jake’s been an awesome driver to drive with and US RaceTronics has prepared a perfect car for us every race, so we’re really looking forward to the same performance. I have to learn a new track in Jerez, but we have lots of track time, so I’m pretty excited about that. Not much pressure for the two North American championship races, since we’ve already tied that one up. We’ll just use those as mock World Finals races and do the best we can. I think with Jake and I, if we drive as well as we’ve been driving, we have a really good chance to do well in the World Finals.”
Ron Atapattu – “It’s been a good season for Elephantea Racing and I’m really looking forward to the season finale in Spain. Patrick has done a great job since joining me at Road America and I think we’re going to be able to get a few podiums this weekend. It should be fun!”
Shane Seneviratne – “Well, here we are at the World Finals. Looking forward to a good race weekend overall. We have four races, so it’s going to be a busy, exciting weekend. The series and the track have done an amazing job. Everybody likes the facility; they’ve done a beautiful job with hospitality. We’ve had a remarkable season so far. Really looking forward to highlighting the season and bringing the season home to a good close for the entire team.”