Salinas, California (Saturday, Spetember8, 2018) – Today’s victory celebration for the No. 50 Lamborghini of Beverly Hills was dampened by the incident on lap six involving Sheena Monk. The entire US RaceTronics team is sending their wishes for a speedy recovery to Monk.
Edoardo Piscopo stayed out until the final minute of the pit window in a strategy that paid off for him and co-driver Taylor Proto. Today’s win gives the pairThe other four team cars also finished on the podium. Brian Thienes won the AM class, while Parris Mullins and Mark Proto brought home the victory in LB Cup. Mike Hedlund and Pippa Mann finished second in the Pro-Am class and Damon Ockey finished third in AM.

Piscopo started the race second overall and first in the Pro class. He was passed on the first lap but continued to push the car to stay in contention. After a long red flag, Piscopo put down fast lap after fast lap building a gap as his competitors pitted. With less than a minute to go in the pit window Piscopo turned the car over to Taylor Proto who came out in front of the field right before a full-course yellow came out sealing the pairs third victory of the season in the No. 50 Lamborghini of Beverly Hills.
“I’m extremely happy with the result,” Piscopo said after the race. “It’s hard to enjoy the win considering what happened to Sheena. My thoughts go out to her. Overall because of what happened we knew that the race was going to be won with a strategy and I think that my engineer (Marco Bielli) did a great job by calling me in at the very end of the pit window. Thank you to everybody at US RaceTronics for helping to make this happen.”
“Today was a good race for us,” Taylor Proto added. “Edoardo did an absolutely perfect job. Unfortunately, the No. 7 car had a major accident which red-flagged us. Our thoughts and prayers go out to Sheena. Hopefully her road to recovery isn’t too long. So that makes the win bittersweet knowing that one of our fellow drivers was injured as she was, but still we were able to salvage a win out of it. We got lucky with our pitstop. Edoardo did an amazing job of just keeping the car fast, setting quick laps and then building us a gap toward the end of his stint. With around two minutes to go I got in the car and as soon as I left pit lane there was a full-course yellow and that was about it. Again, great work to the team. Our pit stop was incredibly clean. I was sitting there with 30 seconds left to go which I think was probably the quickest we’ve ever done the driver change. Really pleased with the result. Hopefully we can get another result just like this tomorrow.” 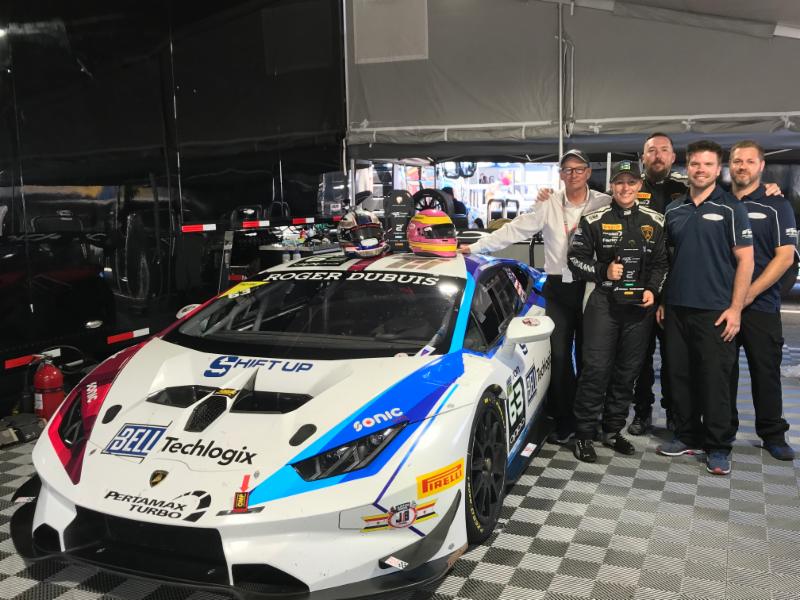 Mike Hedlund and Pippa Mann were successful in their debut with US Racetronics this weekend. Hedlund started sixth overall, second in the ProAm class in the No. 63 Bell Techlogix / AQUAHydrate Lamborghini of Beverly Hills Huracan. He drove a flawless stint before handing the car over to Mann who brought home a fifth overall, second in class for the team.
“We had a really solid race in the No. 63 Lamborghini of Beverly Hills car,” Hedlund said, “but right now we’re thinking about Sheena who was hurt during the race. Luckily, we were able to get through, but our thoughts and prayers are with her right now. Hopefully we’ll hear word on her condition soon. We’re looking forward to tomorrow’s race and hoping to get another podium finish for the team.”
“We were hoping to have a really good run today in the Bell Techlogix / AQUAHydrate / Shift Up Now car,” Mann added. “I’m very happy with the result, but obviously we wish the race had worked out differently. I’m thinking of Sheena and I hope she’s okay. You never want to see a fellow driver hurt, so we’ll definitely be keeping her in our thoughts.”

Brian Thienes brought the No. 17 Thienes Engineering Lamborghini of Beverly Hills home one spot behind the No. 63 for a win in the AM class. Thienes started the race ninth overall and third in class, but good pit strategy moved him to the top of the podium.
“A good job by US RaceTronics for putting the car back together yesterday after a brake-failure incident that definitely got my attention in turn 5,” Thienes said. “We struggled in qualifying and didn’t qualify as well as we had hoped given our pace in practice, but the team did a really good job overnight putting the car into good order allowing me to have a really good race pace. We were able to capitalize on a very thoughtful pit strategy by US RaceTronics and this is more their win than it is mine. Its good to be back on the top of the podium once again and hopefully we can make a charge for the overall Amateur championship.”

Parris Mullins and Mark Proto once again found the top step of the podium in LB Cup. Mullins started the race in the No. 88 Lamborghini of La Jolla and drove a strong stint before handing the car over to Proto in the waning stage of the pit window. The duo finished eighth overall which was their best overall finish of the season.
“I was really excited heading here this weekend because this is kind of my home track,” Mullins said. “The race was eventful and not how we wanted it to go other than the result. Our thoughts and prayers are with Sheena and her family and we hope she has a speedy recovery. But, I tried to maintain our position that we’d gotten in qualifying and obviously the incident kind of threw some things off, but once we restarted I was able to stay out front and when I came into the pits we had a great pitstop and Mark just hauled ass out of there and stayed in front just enough to cross the finish line first.”
“First of off, I’d like to say that Sheena’s in our thoughts and that we hope she’s okay,” Mark Proto added. “We haven’t had a solid update yet, but this race win does come with a bit of an overshadow with her having an incident. As far as the actual race goes, with so much red-flag time I got minimal drive time. We were trying to find a good gap with traffic to bring Parris in and get me in the car. It ended up working out for us. We got the win, so we couldn’t be happier. I’m looking forward to the race tomorrow.”

Damon Ockey started the race from the pole and was leading the AM class until he incurred a drive-through-penalty late in the race. The result was disappointing for the Canadian driver, but he’s already focused on coming back and winning tomorrow’s race.
“So far it’s been a really good weekend,” Ockey said after the race. “We qualified P1 in both races and seventh overall in both races. Today didn’t quite go our way. I was driving really strong and keeping up with the Pro pack and we were putting a pretty good gap between us and the rest of the field. But, we had a pretty big crash and went to a full-course red. We only had 15 minutes left after the restart. I was able to do my pitstop, but I came out behind one of the slower cars and just kind of ran into the back of him, bumped him and flatted his tire and I got a drive-through. We ended up P3 in class, which wasn’t what we wanted, but that’s racing. Tomorrow’s another day and we’ve got the starting position and the car we need to bring home the win.”
US RaceTronics team owner Shane Seneviratne was pleased with the results but wanted to make sure to convey his concern for Sheena Monk.
“Today was a good day for the team,” Seneviratne said, “but right now my thoughts and prayers are for Sheena. She’s a great competitor and we hope that she makes a quick recovery.”
Tomorrow’s Round 10 of the LBSTNA Championship goes green at 11:25 a.m. PDT and will be streamed live at http://squadracorse.lamborghini.com/en-en/live-streaming and http://imsatv.imsa.com/.
Follow US RaceTronics and their drivers all season at:
www.USRaceTronics.com, and through Twitter www.twitter.com/usracetronics, Facebook www.facebook.com/usracetronics, and Instagram www.instagram.com/usracetronics